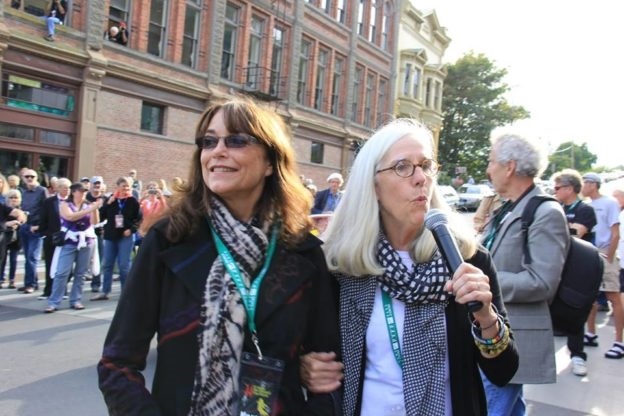 This long-running community event just proves to be more and more popular with every passing year. Household names in cinema such as Karen Allen (in the photo above with Janette Force, PTFF Executive Director) or Malcolm McDowell are invited to attend parades and parties and are practically considered royalty, while filmmakers from both across the country and internationally have a high profile opportunity show off their works to an eager public at different venues throughout the city. This year Actor Danny Glover, Director Jane Campion and Director Charles Burnett will attend, with 70 or more filmmakers.

90+ films will be shown in eight theaters in Port Townsend’s walkable, National Historic District on the waterfront this year! The film schedule can be found on the Port Townsend Film Festival’s website, along with information about some of the highlights of this 3-day event. including the opening parade, dinners, ceremonies and awards presentation.

In addition to all the indoor cinematic excitement, perhaps the biggest attraction of the Port Townsend Film Festival is the 30 foot inflatable screen that gets set up every night in front of the historic Rose Theater on Taylor Street. The whole town comes out to get in on the fun of open-air watching of classics like The Princess Bride or something for the kids like Chicken Run.

A variety of passes are available for the festival, ranging in price from $40 to attend a single film to $1500 for unlimited access (plus concierge service!) The most popular pass costs around $200, and provides all-access to the featured films. For a bargain, the Film Festival offers “rush tickets” for $15 dollars to gain entrance to any show which still has seats available before the screenings.

Homer Smith Insurance has proudly supported the Port Townsend Film Festival since it’s inception. We look forward to the films, fun and festivities every September!

Photos from a past year’s opening ceremony.